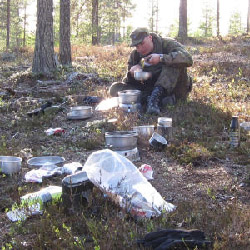 "Nasse was awarded with the Instructor ribbon for his work as the Assistant Chief Instructor in both the Armor course and the vehicle training course.

"Nasse was recruited by Astalo and immediately assigned to armor and vehicle instructor duties after the recruitment to the unit."

"Nasse is a solid key in the training of new tank crew members and jaegers going through the basic vehicle training. Nasse is the second in command of the School of Armor Warfare."

"Nasse was awarded this Voluntary Service Ribbon for his dedication and activity during the 2015 Fall games."