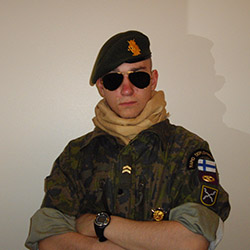 "Jurmo joined FJT in 2013 and was immediately assigned as a Jaeger to the first squad "Sisu" Jurmo rose up to become the 2IC of Sisu in 2015 and has commanded the Sisu 2nd Fire Team ever since. Jurmo has earned this Bronze Member Medal for his three years of solid service as a functioning part of this unit."

"This Special Service Ribbon was awarded to Corporal Jurmo for his magnificent work as part of the Finnish Jaeger Troops Videoteam. Jurmo's job was essential in the post-production of the video."

"Jurmo has shown some real leadership experience and knowledge to benefit the whole unit with his actions. His example is five by five with the unit standards."

"Jurmo joined the Tallinn meeting with some previous experience of Tallinn's nightlife and proved to be a good add to the meeting gang."

Jurmo was the acting team leader of the II/2014 Recon patrol.

"Jurmo was awarded this ribbon for his activity during the 2015 voluntary games."