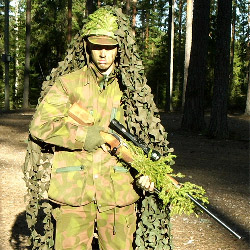 "Apart from Gordon.F, Teme is the most experienced and eldest veteran player of the unit."

"Teme's TS3 server has been up and running for a decade now. It started as an Oldschool TS2 and evolved into a modern TS3 community server."

This medal is for such devotion, that Teme has showed the unit.

"Teme was awarded the Instructor ribbon for the work he has done for the Reconnaissance School and Sniper School during the past 10 years of his service."

The Senior Instructor badge was awarded in March 22nd 2015.

"Teme has been the most active member attending the meetings in addition to the
Commander himself. In addition to this ribbon, Teme has received the Meeting Medal of the Finnish Jaeger Troops."

Teme has organized and attended:

"Apart from the Commander, Teme has been one of the most active members in the unit. This is a fact known by all the members. Teme has earned this medal for his attendance in the five meetings between years 2010 until 2014.

Teme has organized and attended:

Awarded for Teme's work as the Senior Reconnaissance School Instructor. In addition to training recon troops, he has also trained marksmen and scout snipers.

"Teme was awarded this VEH Medal for 200 successful entries during voluntary FJT games of 2019 and 2020."

"Teme was awarded this Voluntary Service Ribbon for his dedication and activity during the 2015 Spring trainings."