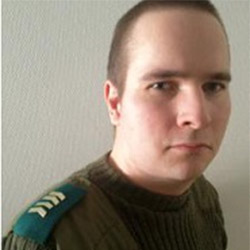 "For his 10 years of active service and
leadership as the Commanding Officer of the unit."

"This Special Service Ribbon with the golden star attachment was awarded to Gordon.F for keeping up the organization for the past 12 years of service. Gordon has kept the games on, NCO's in order and jaegers obeying orders since 2003.

"Gordon is the founder member of the unit, thus
making him the most experienced veteran in the unit."

"Gordon.F was awarded the Instructor ribbon for his efforts to train the new NCO's of the unit during the past 10 years of his service."

"Awarded for his attendance and organizing of the FJT annual meetings. In addition to this ribbon, Gordon.F has received the Meeting Medal of the Finnish Jaeger Troops."

Gordon.F has organized and attended:

"Gordon was awarded this Special Service Medal for his continuous work for multiple operations played thus far in the unit. Gordon has designed and led operation designer team since the beginning of operations in ArmA 2."

"Gordon.F has earned this Meeting Medal for attending the five meetings from the year 2010 until 2014. Gordon.F has been the main organizer for these events.

Gordon.F has organized and attended:

Awarded in 2003 while serving in Expert Rifle Corps

"Gordon was awarded this VEH Medal for 200 successful entries during voluntary FJT games of 2018 and 2019."

Awarded for Gordon's work as the highest ranking officer acting as the training supervisor for the past Reconnaissance examinations since 2013.

In addition to training recon troops, he has also trained Non-commissioned officers and combat pilots.

"This Flight School Pilot Ribbon was awarded to Gordon.F after his successfully implemented and deployed Flight School Training Course for Finnish Jaeger Troops."

"Gordon.F was awarded this Voluntary Service Ribbon for his dedication and activity during the Summer Sunday games of 2014."