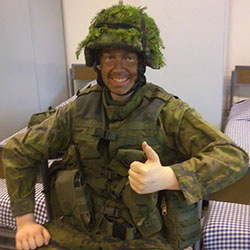 "This Special Service Ribbon was awarded to henkkz for his excellent editorial input during the Spring 2016 ArmA 3 season. Henkkz provivded the unit with multiple new co-op and TvT missions."

"Henkkz has spent his three years serving in the Finnish Jaeger Troops and has proven to be both a solid editor and warfighter worth of gold."

"Henkkz was awarded this Voluntary Service Ribbon for his dedication and activity during the 2015 Spring trainings.