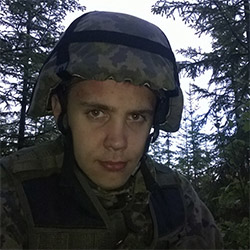 "This Special Service Ribbon was awarded to Auxilar for his oustanding service record and help with the everchanging area of edition and mission simulation."

"Auxilar joined the unit in 2016. It only took about a year until Auxilar began to show his true self as a respected and well known editor. Shortly after Auxilar also showed promising knowledge of leadership and combat strategical thinking."

"Awarded for successfully completing the NCO-School Courses I and II"

"Auxilar was awarded with the Instructor ribbon and the Senior Instructor's silver star attachment for his work as a Head Instructor and Project Lead to develop and create the Finnish Jaeger Troops Basic Training and Jaeger Training Course 2021."

"Auxilar was awarded this VEH Medal for 200 successful entries during voluntary FJT games between 2016 and 2022."

"Auxilar was awarded this Activity Medal for fulfilling the required six (6) seasons with 90-100% activity."

"Auxilar has shown both exemplary leadership skills and ferocious loyalty towards the unit during his 1½ years of service in the unit. Therefore this Exemplary Service Ribbon has been awarded to Auxilar."

"Auxilar was awarded this Voluntary Service Ribbon for his dedication and activity during the 2016 Autumn and 2017 early Spring voluntary games."

This activity ribbon was awarded to Auxilar for his +90% activity during the games of 2017.