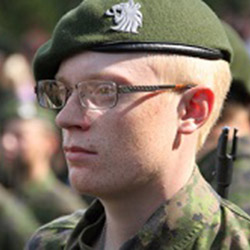 "Nyyppis was one of the many to join FJT in 2013. Nyyppis was assigned to the 1st Squad "Sisu" and worked as an excellent RTO and Medical Specialist in the FJT ArmA 2 games of 2014-2015. In ArmA 3 Nyyppis received more extensive role as one of the Server Administrators. This medal was awarded to Nyyppis for his three years of exemplary service in the unit.

"This Special Service Ribbon was awarded to Nyyppis for his continued technical support and assistance regarding Finnish Jaeger Troops PWS Collection, Mod Support, Helpdesk Support and A3 Main Server Administration."

"Nyyppis was awarded with the Instructor ribbon for his work as a Deputy Instructor and Project Lead to develop and create the Finnish Jaeger Troops Basic Training and Jaeger Training Course 2021."

"Nyyppis has proven to be a reliable and trustworthy lance corporal. Nyyppis has commanded both fire teams and squads in multiple missions and has shown great example to the jaegers throughout the Spring 2016 games."

"Nyyppis has been awarded the Special Service Medal (SSM) for his relentless and arduous work to keep the server up and running for all these years in Arma 3. Nyyppis has proven to be a skilled server administrator and a valuable resource for the unit."

Nyyppis was the acting team leader of the 2016 Recon Course patrol.

"Nyyppis was awarded this Volunteer Service Ribbon for his activity in the Spring 2015 games."