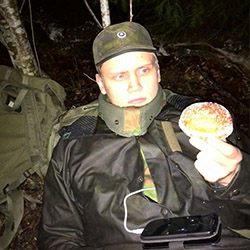 "This Special Service Ribbon was awarded to Nikster for his unselfish attitude to provide a safe place for the unit's game server during 2019 transition from a paid rent server to a privately owned FJT server."

"Nikster has spent the last three years in the unit and accumulated several ribbons along the way. This medal was awarded to Nikster for his three years of active service."

"This was Nikster's first meeting attendance. Nikster is sort of like a mix between a brewer and a moonshine maker. His homemade alcohol drinks found their way to the meeting and were apparently quite popular. Perhaps we'll see more of his creations in the meetings to follow?"

"Armor Ribbon was awarded for succesfully completing the School of Armor Warfare including Driver, Gunner and Tank Commander courses."


"Nikster was awarded this Voluntary Service Ribbon for his dedication and activity during the 2017 Fall games."

This activity ribbon was awarded to Gordon.F for his +90% activity during the games of 2017.