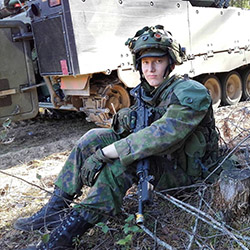 "This Special Service Ribbon was awarded to MacMarine for his activity and contribution to Wednesday VEH games and mission editing in general."

"MacMarine is one of the finest and most highly decorated jaegers in the unit. This day on May 31 he has completed his third year of active service in the unit."

"Awarded for successfully completing the NCO-School Courses 1-6 and the subsequent training phase games."

"MacMarine was awarded this VEH Medal for 200 successful entries during voluntary FJT games of the period: 2017 to 2021."

"MacMarine has shown the unit that everything is possible. Every training and course exists to be completed and utilized in the games to come. MacMarine has proven to be an efficient combat jaeger and an exemplary soldier on the battlefield."

The total training amount for both of the courses was 65 hours of Flight Training.

"Armor Ribbon was awarded for succesfully completing the School of Armor Warfare including Driver, Gunner and Tank Commander courses."

"MacMarine was awarded this Voluntary Service Ribbon for his dedication and activity during the 2017 Spring trainings."

This activity ribbon was awarded to MacMarine for his +95% activity during the games of 2018 Spring.