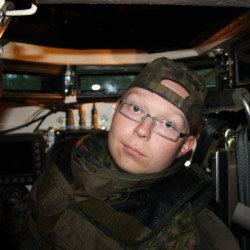 "Astalo was awarded with the Instructor ribbon for his work as the Chief Instructor of both the School of Armor Warfare and the vehicle training course."

"Astalo is the Chief Instructor of the Armor Force. One of the so called "newborn" members, who were part of the re-activation of FJT in 2010. Astalo has been valuable asset for the unit in Public Relations, Marketing and Leadership Management with six years of service since 2010."

"Astalo has proven to be both a reliable Jaeger and a real distinguished organizer for the past meetings. The Commander has been satisfied for the services and knowledge provided by this particular NCO."

"Astalo has been a great help both in organizing and attending multiple meetings. In 2014 Lappeenranta -meeting he was the main organizer and has helped the meeting administration ever since."

Astalo has attended and organized the following meetings:

"Astalo was awarded this Voluntary Service Ribbon for his dedication and activity during the Fall 2015 games."

This activity ribbon was awarded to Astalo in June 6th 2021 for his 100% activity during the Spring 2021 games.